What is the Secular Franciscan Order?

The Secular Franciscan Order, (formerly known as the Third Order of St. Francis), was founded by St. Francis of Assisi in the thirteen century.  Originally we were known as the Brothers and Sisters of Penance.  This is a recognized Order within the Church, with a Rule revised most recently by Pope Paul VI.  We have a formation process, a formal profession, and a monthly gathering which substitutes for communal living.

The word secular simply means we live and work in the world.  Though we make a public profession we are not bound by public vows as are religious orders living in community.  It also distinguishes the Secular Franciscans from the Third Order Regular as represented by the friars serving The Catholic Community of St. Patrick.

So what does a Secular Franciscan do?

We strive to live the Gospel of Jesus Christ and bring Him to all those whose paths cross ours in our daily lives.  We are to conform our life to Jesus’ life.  We show to the best of our ability that the Gospel message can be lived in society today.  We must be ready to forgive, to comfort and most of all to love. As St. Francis explained, “I have done what was mine to do; may Christ teach you what you are to do.”  This is our vocation.

Do you have to be single or celibate to join the Secular Franciscan Order?

NO!  Any Roman Catholic who is single, married, plans to marry, young or old, lay person or diocesan priest not bound by religious vows and wants to follow Christ as Francis of Assisi did is eligible to become a Secular Franciscan.

The primary purpose of formation is to permit those aspiring to the Secular Franciscan life to assimilate and deepen that in which religious identity consists; a deepening of our baptismal promises. Only under these conditions will the aspirant be empowered to a life dedicated to God in the spirit of Francis of Assisi … to be a light in the world as a significant, effective, and faithful witness of Jesus Christ. The formation of candidates, which has as its immediate end that of introducing them to the secular religious life and making them aware of its specific character within the Church, Formation will primarily aim at assisting men and women realize their unity of life in Christ through the Spirit, by means of the harmonious fusion of its spiritual, apostolic, doctrinal, and practical elements.

The call of Christ, which is the expression of a redemptive love, “embraces the whole person, soul and body, whether man or woman, in that person’s unique and unrepeatable personal ‘I’.” It “assumes, in the soul of the person called, the actual form of the final profession I”. Under this form, those who are called by God give a response of penance and love in their turn to Christ their Redeemer: a love which is given entirely and without reserve, and which loses itself in the offering of the whole person as “a loving sacrifice, holy, pleasing unto God” (Rom 12:1). Only this love, which is of a nuptial character and engages all the affectivity of one’s person, can motivate and support the privations and trials which one who wishes “to lose his life” necessarily encounters for Christ and for the Gospel (cf. Mk 8:35). This personal response is an integrating part of the secular profession.

In 2011, the International and U.S. National Councils of the Secular Franciscan Order standardized the Formation Journey. This Formation known as the “FUN” Manual (For Up to Now) journey has now been implemented in all Regions and local Fraternities throughout the United States as well as internationally. The following details the entire Formation Journey: 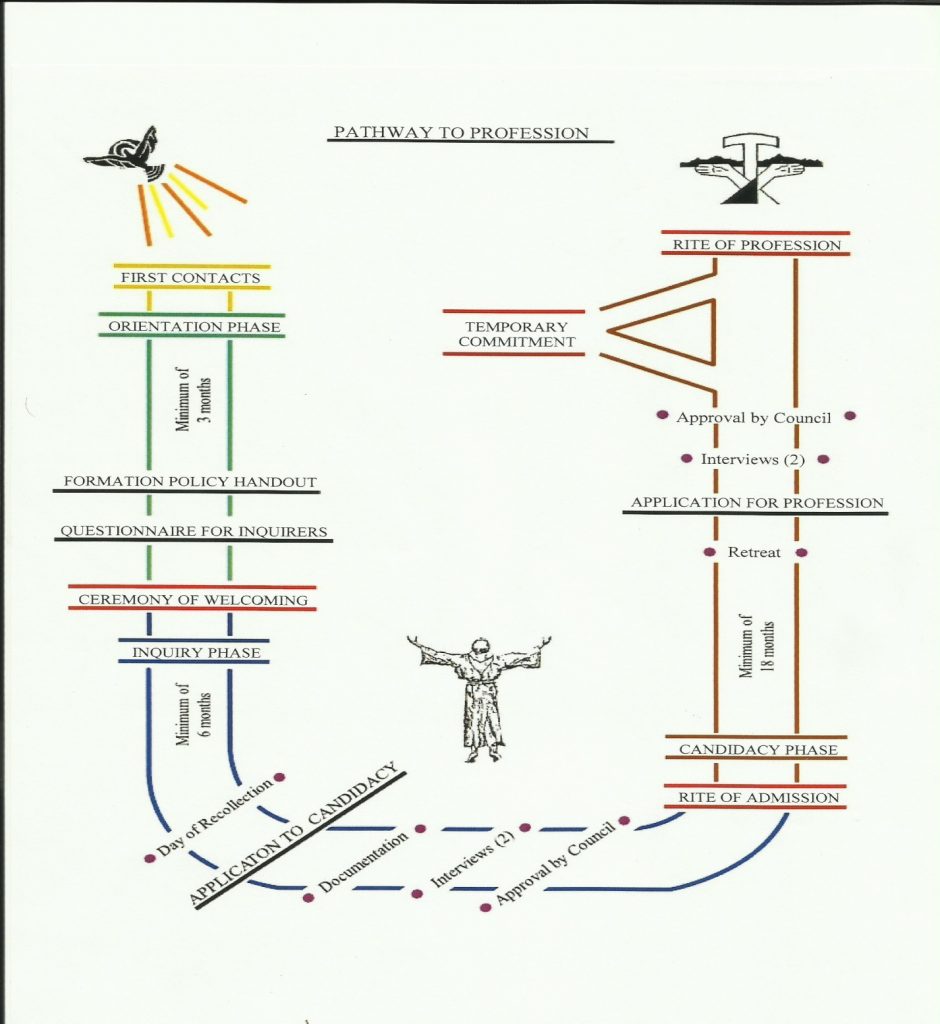 If you have any questions or if you would like to let us know that you are interested in joining our next gathering, please contact us using one of the links below: